Today I gutted a pumpkin and roasted the seeds. Took Elise's tip of boiling them in salted water for 10 minutes, then roasting with olive oil (I added paprika). Yum.

I also made kale chips, with kale I had leftover from soup I made (kale, andouille and potato). Husband doesn't like them - more for me! 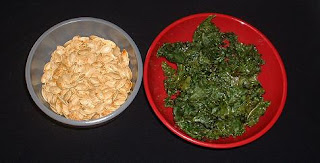 Oh - and you know how everyone always says to line your baking trays with foil? For some reason, I never did until today. I have no idea why I waited so long, and I'm kicking myself for it. My baking sheets have always had baked-in grease spots (olive oil, pork fat, etc) that won't come out no matter how long you scrub. If I had only listened to the voices of reason...
at 5:31 PM No comments:

A while back we were in Monrovia CA, and stopped at Dogwoods. I love that place. Beautiful fruits & veggies, much cheaper than any grocery store. They've got produce I have a hard time getting here, like fresh fava beans, Persian cucumbers. And their canned/packaged stuff - imported from all over the world. I picked up a package of Israeli couscous and a jar of pickled turnips, in addition to tons of produce. They also have an "Indian" section of spices, spice blends, etc. I was kind of overwhelmed, and I settled on this spice blend for butter chicken. 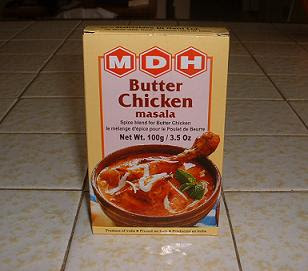 The instructions on the back are a little vague - "Marinate chicken for 30 minutes." Marinate in what? "Add water." How much? Oh well. So I dutifully mashed up my tomatoes and onions, cut up my chicken, and pulverized cashews. Cooked the chicken with the tomatoes & onion for about 10 minutes, added the cashews, spice blend, and a little water, cooked for about 15 minutes more. 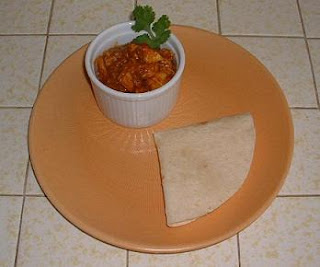 OMG this stuff is HOTHOTHOT! (That's not to say I didn't like it, I like it very much, thank you.) I'm seriously thinking about cooking up another chicken breast and adding it to what's left to cut down on the heat.
at 5:11 PM No comments:

Same view 2.5 days later. Air's full of ash, but at least the sky's not orange! 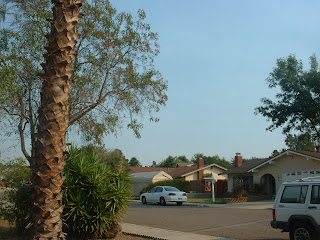 This is just my area in San Marcos. There are still plenty of people in danger, down near the border, and northeast towards Fallbrook and Palomar Mountain. No one's breathing easy yet.
at 3:08 PM No comments:

San Diego County is on fire. We don't have to evacuate (yet?), but we're ready to go. Here's what a fire 30 miles away looks like in the morning. 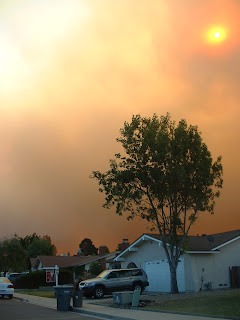 Please say a prayer to Whomever you believe in that the damage to life is minimal. 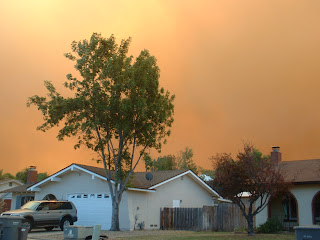 In honor of World Bread Day (October 16), I made this Potato Bread recipe from Chris at Mele Cotte. 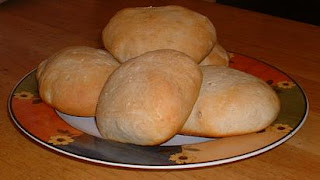 Puffy and soft, with a crispy crust. Good warm with butter. Heck, good without butter! I'm going to try panini tomorrow, the crust looks perfect for that. A definite winner.
at 8:54 PM No comments:

I made this beautiful coffee cake to use up some dried figs from the cupboard and sour cream from the fridge. Lovely. Even fig-hating hubby said it was "heaven". 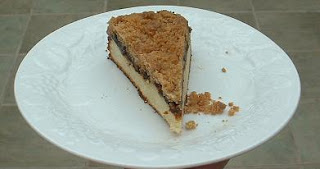 Recipe from Georgia at Mocktale. Thanks Georgia!
at 5:35 PM 1 comment: 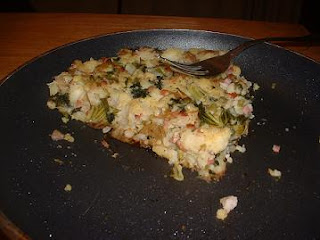 Original recipe from The New Spanish Table by Anna von Bremzen, adapted my me.

Boil your potatoes until tender. Remove to a colander with a skimmer/slotted spoon. Blanch the kale in the same boiling water, maybe 5-8 minutes (sorry, I don't watch my timing much). Drain the kale.

Smoosh the potatoes, mixing in the kale. You don't want completely mashed, but you don't want to be able to say "hey, there's a half of a potato!". Salt & pepper.

Saute the pancetta, onion, garlic and chili in some olive oil, in a large (12 diameter) oven-proof skillet. Dump them into the potato/kale mix.

Re-heat the skillet with a little oil, smoosh in all the potato/kale/pancetta mix, make it flat, then cook on the stovetop over medium heat about 10 minutes. Then throw in a 450 degree oven for about 10-15 minutes until browned on top.

OK, so I knew I was allergic to cantaloupe. If I have even one bite, my throat swells and I start wheezing like a dying asthmatic. But I eat it anyway, because the problems pass in about 15 minutes, and the slight discomfort is worth the yummy satisfaction of eating something that causes me pain.

So I saw this absolutely adorable baby cantaloupe at the local market (that's him next to a 16oz Arizona tea). He's literally 4 inches in diameter. 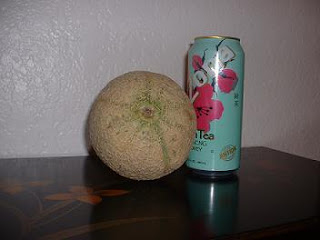 I picked him up, and tucked him in the crook of my arm, as I wandered around the market. When I got to the checkout, I noticed my arm was itchy. The arm that the cute adorable baby little cantaloupe was resting upon. I looked down. Not only was it itchy, it was red. Blotchy. Little bumps, like flea bites.

So, not only can I not eat the baby cantaloupe, apparently I can't even hold him. Little bastard.
at 5:45 PM 1 comment:

So this is my attempt to de-lurk any lurkers. Assuming I have any.

How many cookbooks do you have?

I have 71. Plus 6 in languages other than English (3 French, 1 Italian, 1 Hungarian, 1 Thai). Plus 3 books that are about food, not recipe books (Cod by Mark Kurlansky, The Physiology of Taste by Brillat-Savarin, and Cooking for Kings, The Life of Antoine Careme, the First Celebrity Chef, by Ian Kelly). Oh, and there are about 5 more in my garage waiting for someone to buy them on half.com.

Some of the 71 are "limited edition" plastic-spiral-bound church cookbooks, self-published from the deli around the corner, etc.

First let me say that I am NOT going to post a picture of this. I don't think anyone could make this soup appear appetizing with a photograph.

That being said, this soup was absolutely amazing for being completely unplanned and requiring zero trips to purchase ingredients.

There was this sad little bag of whole dried peas in my cupboard that I purchased a while back from the Escondido Swap Meet & Farmers Market on a whim. (If I had been thinking, I would've photographed the cute little peas, so there would've been at least one picture to gaze at.) Three or so hours later, the sad little bag was transformed into a delectable pot of split whole pea soup.

Saute the onion, carrot and celery in some sort of fat about 10 minutes. I used chicken fat that I had skimmed off the broth. Dump in the broth, peas, bay leaf and thyme. Bring to a boil, then let simmer forever. Use an immersion blender or the back of a spoon to smash/puree if you so desire. Stir in the ham, salt and pepper to taste. Simmer a little longer, until the peas are done to your liking.

And to further the "use up whatever you can find in the house" theme, chunks of day-old baguette make a great spoon.
at 4:34 PM No comments:
Newer Posts Older Posts Home
Subscribe to: Posts (Atom)