Green beans were beautiful, local, and inexpensive at the grocery store, so I bought a bunch. I was thinking about a Sicilian green bean dish a friend of mine had made at Christmas - beans, tomatoes, garlic, cooked to death, served only slightly warm. I usually like my green beans barely cooked, but for some reason, I couldn't get enough of the soft garlicky tomatoey beans.

I found this recipe for Green Beans and Tomatoes in Olive Oil (Loobyeh bel Zeyt, لوبياء-بالزيت) from Taste of Beirut. (Awesome blog, great recipes. Go check it out.) Sicilian and Middle Eastern food have some similarities, so I decided to go with it. 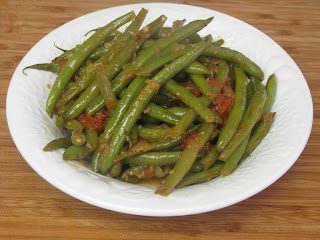 The only way I deviated from the recipe was to use half the amount of red pepper flakes, and an equal amount of Aleppo pepper, since I have some that needs to be used up.

What, again with the beef cheeks? Well, yes, because I only used 2 out of the 4 pounds I had when I made the ragu. With that much work going into the preparation of the meat, I wanted to taste it two different ways.

I was thinking Beef Bourguignon, a la Julia Child. And as luck would have it, I found that Nose to Tail at Home had already done it with cheeks.

I followed the recipe provided by Elise at Simply Recipes, substituting the beef cheeks for the chuck. I don't think I've ever made a stew-y thing that required cooking the components separately, but for whatever reason, it worked.

Look at these onions: 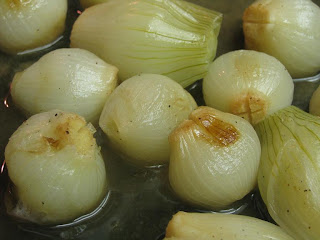 And these absolutely gorgeous mushrooms! 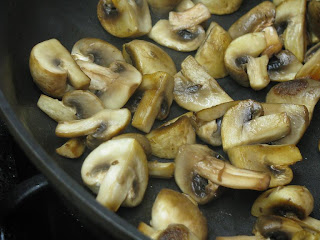 And, the finished product. 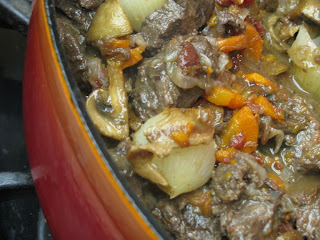 "Beef what ragu?" That's what my Hubby said when I told him what I was making.

You see, I was out looking for pig tails (don't ask), and I finally found them at Talone's. What an awesome market. (Check out Masa Assassin's post on birria de chivo (goat stew), and a picture of a Talone's advertisement.) If there's any cut of meat you want, chances are they'll have it. Case in point, I purchased a 10 pound bag of beef cheeks, at $3/lb.

I got them home, and started cleaning and trimming. Each cheek (there were 4) took about 20 minutes to turn into something recognizable as meat (you really don't want to know what they looked like right out of the bag). From the initial 10 pounds, I was down to 4 pounds of useful parts. So $3/lb just turned into $7.50/lb. Kind of expensive for an "off cut" - whatever I made better be pretty darn good to justify the price and the amount of work that had already gone into this.

I knew I had to do a slow-braised kind of thing. Think about it - what do cows do all day? They chew. That means this muscle is going to be pretty tough. And indeed it was, my hands were sore for 2 days after sawing through them for an hour and a half.

An internet search (using my favorite recipe finder, Food Blog Search), turned up Beef Cheek Ragu from Just Cook It. The recipe called for a 6 hour braise in a "very low oven", which my Twitter friends told me was anywhere between 150 and 250. (I picked 220.)

After six hours, "the meat should be falling into the sauce", and was it ever. What, in its raw state, would have been difficult for my dogs to chew, now fell apart when I waved a fork over it. Well, I'm exaggerating slightly, but you know what I mean.

I cooked up some kick-ass pasta called trotolle, and topped it with the sauce. 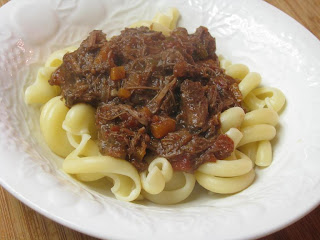 I had half a tub of sour cream in my fridge, and needed to use it before it went bad. I also had a couple green apples, so I was thinking a cake of some sort. I searched through my bookmarked recipes, and found this Apple Crumb Cake from Nibbledish. 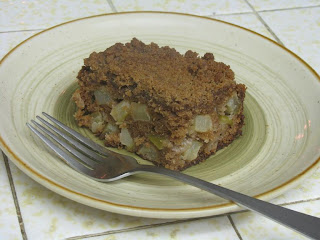 It was just what I was looking for - a little sweet, a little crunchy, and it helped me use up stuff I had on hand.
at 4:35 PM 3 comments:

When the weather turned from warm and sunny to chilly and rainy, I decided I needed to cook something comforting. Being of Eastern European descent, that could only mean one thing - cabbage. And as luck would have it, I had a bookmarked recipe for Braised Green Cabbage from Smell & Taste are My Memory. 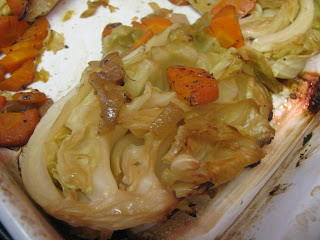 As with many of the "comfort foods" I make, this took a while - 2 hours of slow braising, followed by 15 minutes at higher heat to brown the cabbage. Plus an overnight rest in the fridge, because braised things are always better the second day.

I was a little worried that the recipe only called for 1/4 cup of broth and 1/4 cup of olive oil (of which I only used half), but I forgot that the tight seal of the foil on the dish would prevent the liquid from escaping. What I ended up with was meltingly tender, sweet, almost nutty cabbage, accompanied by caramelized bits of onion and carrot.

So what did I do with the final product? A wedge in a bowl, next to some of the stewed white beans with lamb that I had just made. And a fried egg on top. 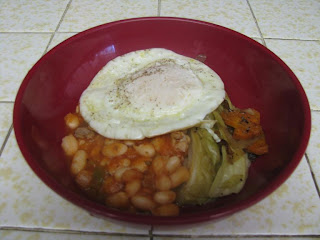 Is there anything that can't be made even better when topped with a runny yolk?
at 2:16 PM 6 comments:

Almost a year ago, I bookmarked this recipe for Stewed White Beans in the May 2009 issue of Saveur. And now I'm kicking myself for waiting so long to make it. 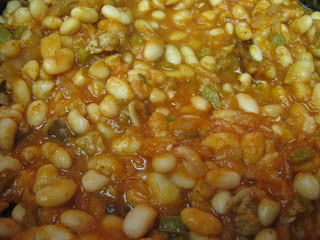 It takes some time and planning, of course. Soak the beans overnight, then cook for an hour. After that comes the fun part - the recipe called for a lamb blade chop, but I found a package of neck bones, so I used that instead. You brown the heck out of it (yay, fond!), then add in onion, garlic, and an Italian frying pepper. The stores around here have never heard of such a beast, so I used an Anaheim. After the veggies are nice and soft, you add tomato sauce, oregano, Aleppo pepper, and grated tomatoes. Cook that down a bit, then pour in some chicken broth and the drained beans. Let the whole pot simmer to blend the flavors, then remove the lamb, pull off the meat, and return it to the pot.

I think my Aleppo pepper is a little old, because I could barely detect the characteristic smokiness, so I added in some smoked paprika to augment it.

This would be a great dish next to some sauteed greens, broccoli rabe, etc. Or just next to a piece of toast. Or with a fried egg. Oh yeah, a fried egg. Stay tuned...
at 2:08 PM 2 comments:
Newer Posts Older Posts Home
Subscribe to: Posts (Atom)