Up front, let me apologize for the lack of pictures. Here are my excuses: 1) This is not a very photogenic dish. 2) I just couldn't be bothered, really.

That being said, dinner was amazing. Here's what you do:

Salt and pepper your beef shanks. I had 4 pieces, 1 to 1.5" thick, somewhere around 2.5 pounds. Dredge in flour, shake off the excess, and brown well. Remove to a plate.

Dice up onion, celery and carrot, about 1/2 cup each. Mince about 3 cloves of garlic. Saute the veggies in a little oil, (in the same pot you browned the shanks in) until nicely caramelized. Mix in a few tablespoons of tomato paste, some smoked paprika, and a couple minced anchovies. Deglaze with a little red wine or broth, scraping up all the happy fond.

OK, I lied about no pictures. Here's a picture of minced garlic. 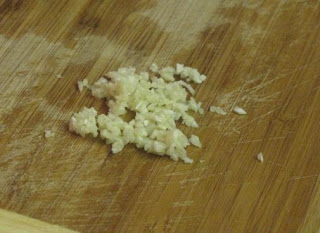 And here's a picture of fond that I dug up from some previous dinner. 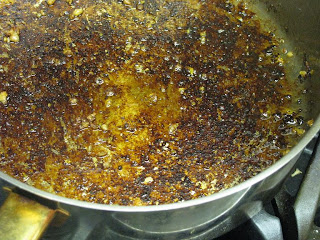 Add about 4 cups of broth and 1/2 cup of red wine. I used a mix of beef and chicken broth. Return the shanks to the pot - you want the liquid to come about halfway up the shanks. Toss in some seasonings - I used thyme, oregano, bay leaf, and a dash of Worcestershire sauce. Bring to a boil, then cover and reduce the heat to low. The trick now is to maintain a bare simmer for about 3 hours.

While the shanks are cooking, you can skim the fat from the top. Or (since this is one of those better-the-2nd-day dishes), when the beef is tender, refrigerate overnight, and remove the solidified fat the next day. I also like to refrigerate the cooking liquid separate from the meat, since beef shanks have a lot of fat and gristly weirdness, which I removed prior to mixing back together with the liquid.

Serve over rice, noodles, potatoes, or polenta, or with a nice crusty bread.

You'll most likely have a lot of liquid left over - use it to make French onion soup! Or top your hungry puppy's dinner with it! 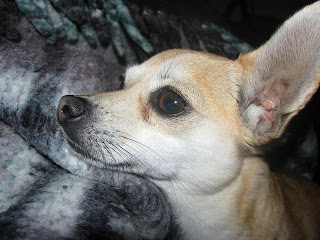 You're funny. The picture of the pup is all that's required anyway. Hee.

It's no different than if I had read this in a magazine with no photo, and it sounds great anyway. I would totally do the refrigerate overnight and remove the fat bit.

That sounds wicked good. I've been wanting to try out shanks, I love braising stuff and they are supposed to be good for that.

Hey Bob - This works well with lamb shanks and beef short ribs too.

Cute puppy.. this sounds terrific and I love that you can use it for French Onion soup.. Awesome idea..

Hi Donna -
It would've been a shame to toss all that beefy collagenic goodness, had to think of something!