I came across this recipe for Pogacsa with Pork Rind over at Kool Kat's Kitchen Adventures, who also has a blog in Hungarian if you're lucky enough to be able to read it.

Pogacsa is basically a Hungarian scone. They can be plain, or have any number of add-ins, such as cheese, poppy seeds, caraway seeds. They can be small or large, yeasted or not. When I saw Kat's recipe involving pork rind, I just had to make it. Crushed cracklings are great in cornbread, why not in a yeasty biscuity scone? 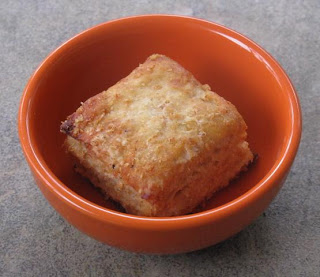 I did have a problem, unfortunately, with the whole folding process. Wait, let's go back a minute. I had a problem getting my pork rind (chicharones, mmm) to chop in my blender. Kat's recipe says blend until creamy. Umm...not happening. So I chopped and chopped and chopped until the crunch under the knife became less noticeable (kind of like what I did with my cilantro "puree").

So when I spread my cracklin' crumbles (completely different from creamy cracklin's, as I would soon find out) on the dough, I knew I was going to have a problem folding. The first two folds went ok, but by the third, I was getting air pockets and the dough was tearing. But I had gone this far, I had to finish. I shortened the resting time in between the last few folding sessions, pressed the whole blob down to about an inch thick, and cut out squares. Baked until golden. 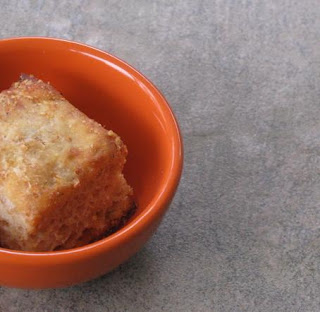 The result? Honestly, not so great, not what I was hoping for. They certainly look tasty, with the happy little porky bits on top and throughout the flaky layers (I got flaky layers, yay!). But I think I undersalted the dough. And maybe I should've used buttermilk instead of yogurt. Will I try it again? Yes, if I somehow find a way to make pork rind cream. Or if someone else makes them for me.

By the way, do you like my new little orange bowl? MIL brought it home as part of a dip set, with 4 little bowls, all different colors, with a clover-shaped white dish that holds all 4. Taste of Home rings a bell, but I can't find it on their website, and the dishes don't have any identifying markings, not even a "made in China".
at 5:58 PM

Hmmm! I think I would have to try this before going to all the work of making it. I'm not familiar with pork cracklings. Maybe I'm really missing out on something.

This is my favourite pogácsa! It's absolutely worth working with!
And I'm happy that Kat's recipe "travelled" so far :-)
Niki (from Hungary)

I love the idea of this. I wonder if she had a different kind of crackling

Hi everyone - I used Mexican chicharrones, which is basically fried pork rind with a fat layer and a meat layer, about an inch thick. I'm sure if I had a better blender, I would have been able to get the creamy consistency the recipe called for. I might try again with fresher (still hot) pork rind, it might grind better.

Kudos to you for attempting this very exotic (to me) bread. Wow, pork rinds in bread. I feel my world has been expanded so much.

Hey js - Crushed pork rind is great in cornbread too. Hey, maybe it would work in corn toasties, too!