I wanted to bake something, but didn't want to go to the store (lazy, y'know). I raided my pantry, and found bits and pieces of a lot of things. Nuts, fruits, seeds, etc. But what stood out was the chocolate chips and the shredded coconut. Cookies? Who doesn't like cookies?

I used this recipe from Gourmet, via Epicurious. Very good. But don't overbake them like I did on the first tray. 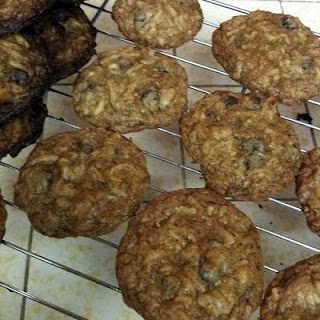 Chocolatey, chewy, cookie-y. Even the coconut hater in the house liked them.
at 6:49 PM 4 comments:

So after making the hot sauce with the ghost chiles from Marx Foods, I still had a few chiles left over. Having absolutely no idea what to do with them, I figured I could dry them in the oven. (I saved the seeds, sending some to friends, and keeping the rest for myself to plant in a few months.) 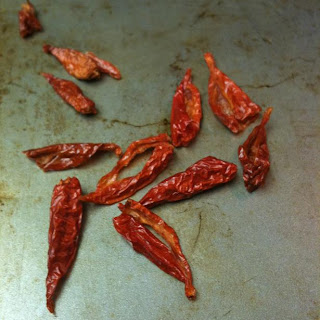 My oven only goes down to 170, but I wanted to dry them at a lower temperature, about 150, so I stuck a wooden spoon in the oven door. Once again, I feel I must warn all of you about the fumes. My entire kitchen was filled with eye-tearing, throat-choking evilosity. (Yes, evilosity is a word, because I said so.) 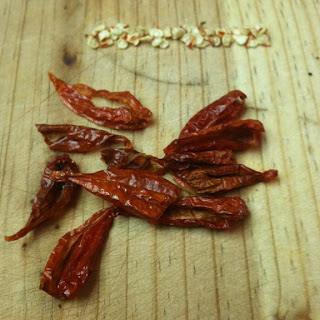 So now these pretty chiles are safely stored in a baggie in my pantry until the next time I feel like spicing up dinner.

Aside: My Youngest told me: "You are not allowed to snort that line of seeds."
at 6:36 PM 4 comments:

Remember the ghost chiles I got from Marx Foods? After using 1 tiny one in my Japanese curry, I needed to come up with a way to use up the rest. I settled on a hot sauce, and used Rick Bayless's recipe for habañero hot sauce, posted by Michelle at Thursday Night Smackdown.

Looks innocent, doesn't it? All orange and pretty from the carrots. 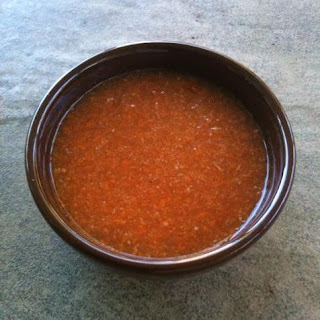 As it turns out, looks can be incredibly deceiving. I almost passed out when I was making the sauce. Twice. The first time was when the carrots, onions and chiles were simmering in cider vinegar. Look out for those fumes! Boiling vinegar combined with hot chiles is not a fun thing to inhale.

The second narrowly averted pass-out was after I blenderized all the ingredients, took the top off the blender, and (like the fearless/stupid chemist that I am) leaned my face directly over the blender to see what it smelled like. Immediately, my eyes were stinging and tearing, I felt like sneezing, and the breath that I was in the process of inhaling got stuck in my throat.

That being said -- this is one of my favorite homemade hot sauces. Sweet from the carrots, definitely spicy, tangy from the vinegar, and, um...oniony from the onions. Very good. Just be careful.
at 4:25 PM 2 comments:

This lasagne is awesome. It's almost a shame to eat it. It's like killing a unicorn. Like with a bomb.

I hate the word 'secretion'. It's a horrible, horrible word.

H: You should be a doctor. You have the mind for it.
Y: I hate people. That's why I want to be a writer. That way I don't have to deal with people.

Douchebag - it's not so bad, you can throw that away. But doucheface? You're kind of stuck with it.

Never underestimate the power of a pretzel.

Dad, are you upset with how often I use the word "titties"? 'Cause I say "titties" a lot.

Who could ever get sick of fried rice? Not me. It's so versatile - you can make it a clean-out-the-fridge meal, or add specific ingredients (like shrimp and pineapple). This, my friends, is of the clean out the fridge persuasion.

I though about using Spam, given some online conversations I've been having, but I saw the package of thick cut bacon in the freezer, and decided to go with that. Here's my mis en place: clockwise from top left, carrot, red onion, chiles de arbol, ginger, garlic, jalapeño, cilantro, bacon, and scrambled egg. Not pictured is the rice and the peas I added at the end. 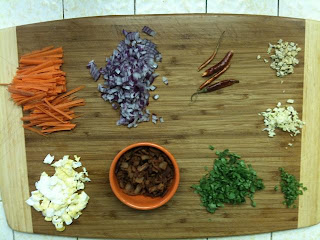 Normally I use canola or peanut oil to fry the rice, but looking at the bacon fat left over in the skillet, I thought, Why not? 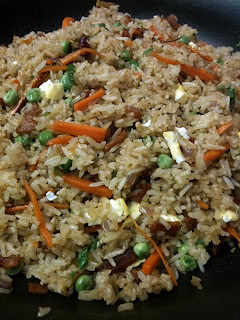 Husband said this was one of the best versions of fried rice, not only that I've ever made, but that he's ever had. Score.
at 2:53 PM 4 comments:

I recently spent 5 days in Chicago. What did I do? Visited friends and family. And ate a lot. I'm surprised I didn't gain 10 pounds. What follows is only some of what was on the table.

But first - the Bean. Because no trip to Chicago would be complete without it. 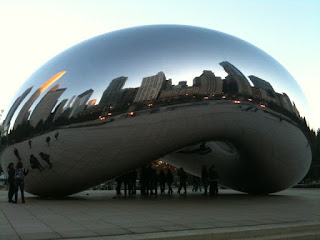 Dinner at Sushisamba was an epic experience. A friend of mine knows the chef (Dan Tucker, awesome guy), so we ordered nothing, just let him send things to the table. 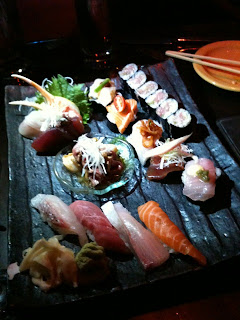 Kobe beef, cooked by us on a hot rock: 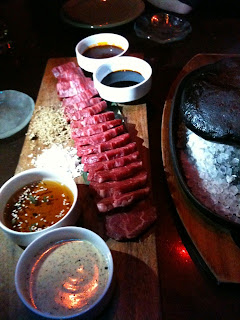 And, my personal favorite, duck ragout on a corn arepa with cilantro cream: 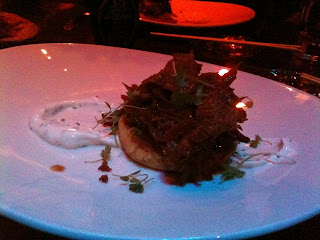 There was more (much more), including a sweet corn fritter, a whole chicken, skirt steak with Malbec butter (!), etc., etc. This meal alone would have been worth the trip. 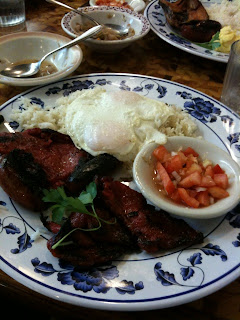 The Purple Pig wasn't in the original plan, but was a spontaneous decision. And a good one it was. 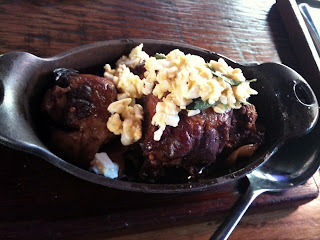 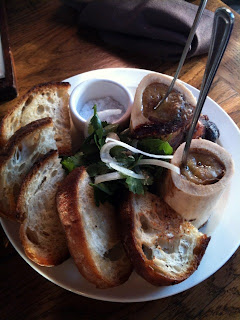 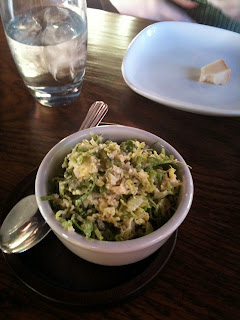 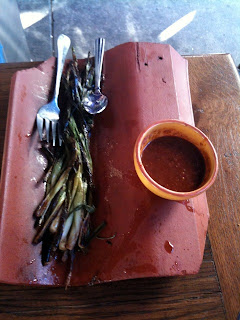 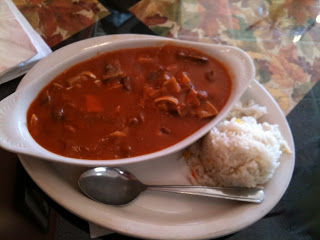 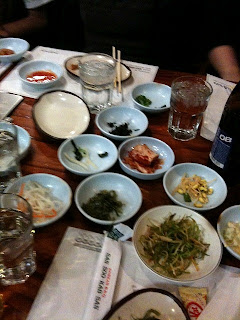 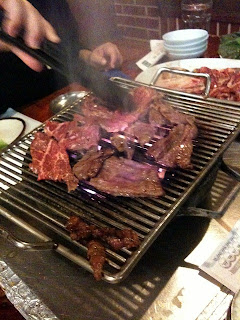 I certainly enjoyed my brief culinary tour of my favorite city, even though I only scratched the surface. Looks like another trip is in order...
at 5:44 PM 6 comments:

Have you heard of ghost chiles? I've also seen them called bhut jolokia and naga jolokia. They're hot. Really hot. Hottest pepper in the world. They come in at about 1,000,000 on the Scoville scale, or 3-10 times hotter than a habañero.

I was lucky enough to get a sample package of fresh ones (only dried have been available until now) from Marx Foods*. I opened the package, and was immediately assaulted by their fragrance - they even smelled hot. I was a little apprehensive - what could I possibly do with a chile that's so strong? Well, first off, I gave a few away to coworkers. (None of the Americans wanted any, so they went to Mexicans, a Laotian, and a Korean.)

I realized I hadn't made Japanese curry in a while, and that sounded like a good (and easy) place to start. Armed with my package of S&B Golden Curry (mild), I chose the smallest pepper in the package. 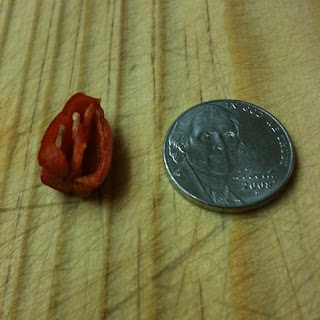 Aw, how cute. What wasn't so cute was that I could find only one glove. So my knife hand went gloveless. While mincing, a piece of chile touched a cut on my hand. Ow. Burn. Ow. Yikes! Experiencing firsthand what this little monster chile could do, I decided to only use half of it in the curry. I used about 1.3 pounds of pork, and an equal amount of veggies (carrot, celery, green pepper, onion). So 2.5 pounds of stuff, with a piece of chile the size of my fingernail. 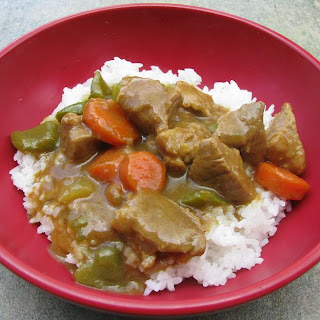 And you know what? It was good. Really good. Ghost chiles have an awesome flavor. I could've even added the other half of the chile, and it wouldn't have been too hot. (Husband called this a "3" on the hotness scale.) Maybe it's because it was simmered for a while, maybe because it sat overnight, but the heat definitely mellowed out.

So, experiment #1 with ghost chiles complete and successful. I wonder what's next...

*The chiles were provided free of charge from Marx Foods. I didn't promise to blog about them, and they didn't ask me to.
at 7:43 PM 8 comments:

I picked up some gorgeous king oyster mushrooms at Mitsuwa the other day - they sat in my fridge while I pondered what to do with them. I had already breaded and fried, and had also sauteed and sprinkled with smoked salt. Hmm, what to do? I looked outside at the rain, and - bingo - soup. 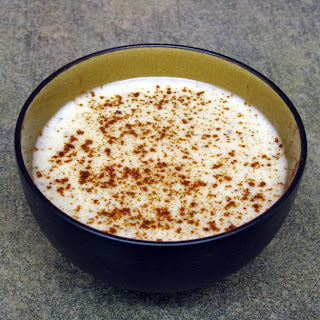 This recipe is almost exactly like my husband's clam chowder, just substituting mushrooms for clams, and chicken broth for clam juice. Chop the shrooms finely, along with some onion and a little bit of celery. Sauté until the onion is translucent and the mushrooms lose most of their liquid. In the meantime, make a roux, then stir in some heavy cream, then some milk and chicken stock. Dump in the mushroom mixture, bring to a boil, reduce the heat, and simmer for a while. (Don't forget to stir!) To serve, dust with paprika, sprinkle with parsley (or both), and don't forget the crusty bread.
at 7:32 PM 8 comments:

You've got to be an a$$hole if you don't like garlic and sauce.

"Hey Dad, did you brush your teeth this morning?"

"He said put the cortisone on it, and it'll go away."

Husband: I'm going to the store. Do you need anything?
Me: Milk.
H: Milk? I was thinking more like tampons, douche...
M: No, that's your shopping list.

"That was my next thought."

Nobody could f*ck with Lou Diamond Phillips.